Every Denver sports talk radio listener remembers when, in February of this year, 104.3 the Fan (Denver’s top sports talk station) announced that the great Alfred “Big Al” Williams had decided to leave the station and to vacate his seat in the Fan studios where he sat with Darren “Dmac” McKee for the better part of a decade broadcasting in the afternoon drive time slot. It was a shocking announcement. 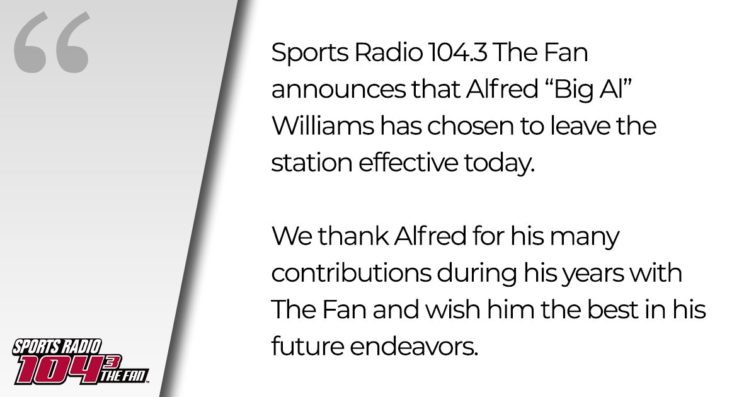 No less shocking was the revelation that Big Al was heading to IHeart radio’s prized “blowtorch” News Radio 850 KOA.

Williams had a non-compete clause to wait out and while he did management at KOA set forth to rebrand the station around his acquisition, shifting away from news and politics and crafting the station to compete with the Fan in the sports talk radio arena.

IHeart Radio moved much of its staple programming (such as the Rush Limbaugh Program) to its new “Freedom 760” which replaced the failed “all-Broncos all the time” Orange and Blue 760 in order to clear the decks for its semi format change. KOA ultimately placed Big Al in the exact same time slot he had shared with Dmac at 104.3 the Fan in an effort to compete head to head with the popular station.

Big Al was coupled with Jo Jo Turnbeaugh, a veteran of the Denver air waves, to form a new show titled “Big Al and Jo Jo” from 3-7 PM weekdays. 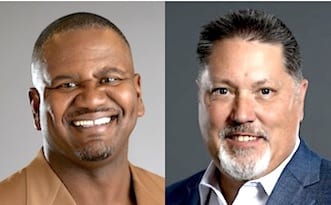 The move has proven to be a complete and utter ratings disaster.

When September’s Nielsen Audio ratings were released KOA had posted its poorest number ever with a 3.0 rating.

RadioInsight dot com wrote “The move of iHeartMedia News/Talk 850 KOA/94.1 K231BQ Denver to a more Sports focused lineup has not payed instant dividends as the station’s three month trend brings it 5.0 – 4.0 – 3.0 which is a record low for the station.”

KOA’s historic slide has continued over the past month.

This week RadioInsight published these comments:

“One month after setting a record low with a drop to a 3.0 share following its move to a Sports-heavy lineup, iHeartMedia’s 850 KOA/94.1 K231BQ Denver has smashed that record by dropping to a 2.4. That marks the erosion of half of its audience since registering a 5.0 share in the July monthly.”

“The KOA move was built to target Bonneville Sports “104.3 The Fan‘ KKFN with the hiring of their former afternoon co-host Alfred Williams, yet KKFN rose this month 3.5 to 3.7.”

Yep. KOA has lost HALF of its audience since July. That’s stunning. It certainly could not have helped that the Rockies were horrible and now the Broncos are also awful but it seems pretty clear that the strategy of trying to compete directly with the Fan was a bad one. KOA had a core audience and they basically abandoned it. The effect is obvious.

Meanwhile, the Fan’s audience is growing and the Bonneville International property remains among the top handful of stations in the Denver market and the second most highly rated talk format station.