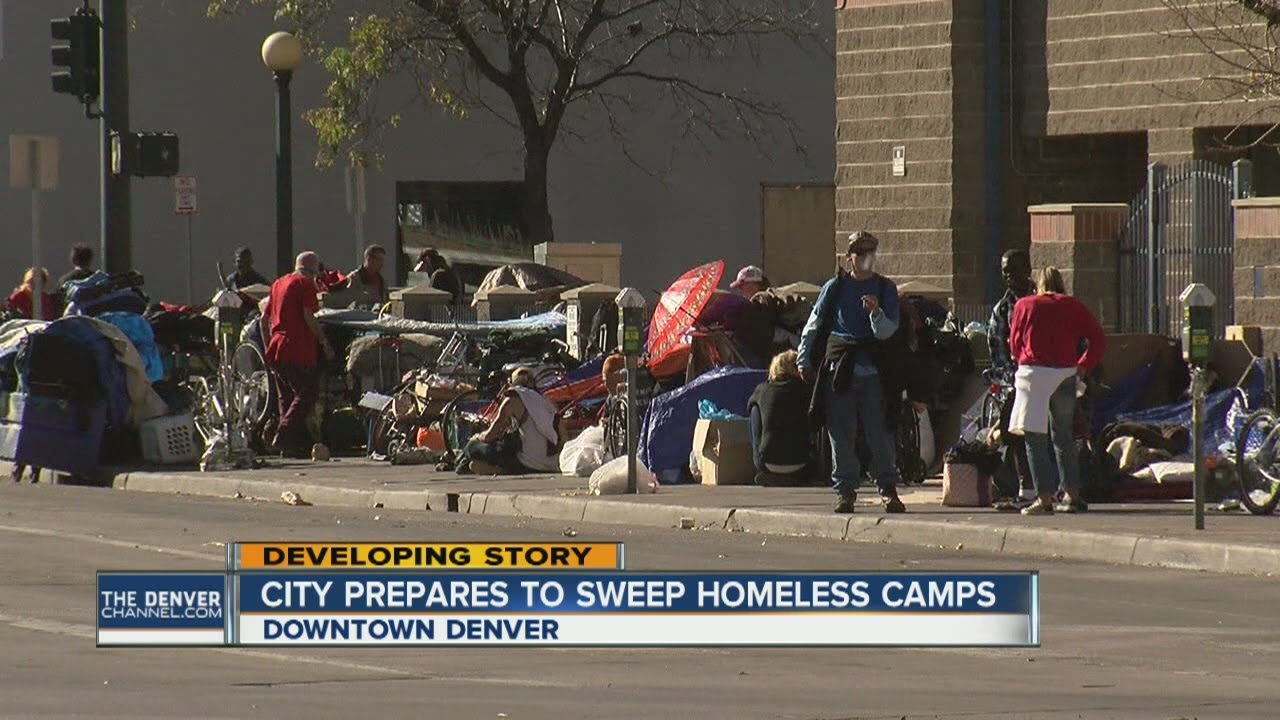 Author’s note: This is a sports site. We cover Denver sports and Denver sports media. This is the first piece I have ever published here that dealt with a local issue of this variety. I chose to use South Stands Denver as a venue for this piece because it’s available and accessible and because I feel very strongly in my vehement opposition to Initiative 300 – or, as I call it, Initiative “Aw, screw it”.

My morning commute takes me northbound on Downing street each day on the stretch between Evans and Alameda; right past Washington park. The yards of the homes opposite the park almost all have signs reading “No on 300 – we can do better”.

What residents fear is that that if Denver’s Initiative 300, dubbed by its supporters the “Right to Survive” initiative, passes on Tuesday, May 7, Washington Park will become a dystopian refugee camp for Denver’s homeless.

Language within the proposed ordinance allows the following in public spaces:

It would end Denver’s urban camping ban which has been in effect since 2012 and it would without question turn Denver parks into campgrounds for those “experiencing homelessness”. Residents of the Wash Park neighborhood have every reason to fight the measure. It could potentially devastate their property values.

Some parts of town are already experiencing this, even with the camping ban in place. My brother owns a home near the corner of 23rd and Arapahoe street – downtown, not far from the Denver Rescue Mission. A massive encampment has formed on that block filled with tents and lean-tos, shopping carts, stolen bicycles, open drinking and drug use and piles of garbage and human excrement. It’s called “Jerry’s world”, named for the first person to set up camp there. Residents have posted signs saying things like “homelessness is not a crime” and “move on to where?”. If Initiative 300 passes this unsightly debacle would not only become perfectly legal but situations like it would inevitably pop up in every area of town as more and more destitute people flock to make the city of Denver their home. 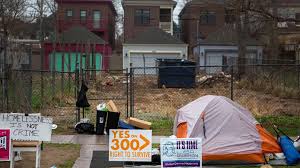 Already Denver is a destination city for the career homeless. I know this because I work in an area where I encounter many people who are wandering the street, pulling along suitcases or pushing carts or baby strollers overflowing with sleeping bags, blankets, cardboard signs and other meager belongings and I strike up conversations with them. They come here, often via the downtown Greyhound station, from all over the  U.S.. Arizona is a place I am commonly told that folks came here from, along with Michigan, Texas and California. What I almost never hear is “Colorado”.

There’s an organization in Denver called “Homeless Out Loud” that seemingly openly encourages people to become and remain homeless. This group “loudly” supports Initiative 300 and the perceived right of people to place temporary shelters wherever they please. This group exacerbates the problem and seeks to absolve people of personal responsibility for their own situations and encourages more of the wandering to wander into Denver. 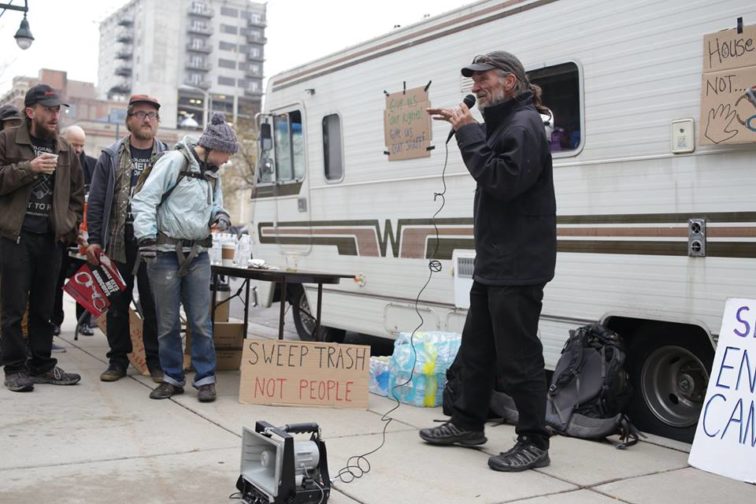 Denver’s climate is one reason that people come here – along with legalized marijuana and relatively lenient laws dealing with urban camping. Denver may have a ban in affect (that Initiative 300 seeks to end) but that has done little to dissuade people from coming here to experience homelessness. Were Initiative 300 to pass this would only become that much more desirable a destination, thus turbo-charging the problem with homelessness in our city.

Aside from its toxic effects in terms of luring more needy people to the Denver area and vastly increasing urban blight, the measure would also have devastating effects on homeless people. A more appropriate name for the measure than “Right to Survive” might be “Aw, screw it” because that’s essentially what it says. It says there’s no sense in trying to solve the problem of homelessness or even to lend people a hand. It says “let’s just give up and let them live in the streets and in our parks and on downtown sidewalks”. It absolves us as a community of the challenge of actually confronting a serious and quickly growing problem.

Without a far better solution Denver’s homelessness crisis is well on its way to rivaling those of Portland, Seattle and San Francisco. 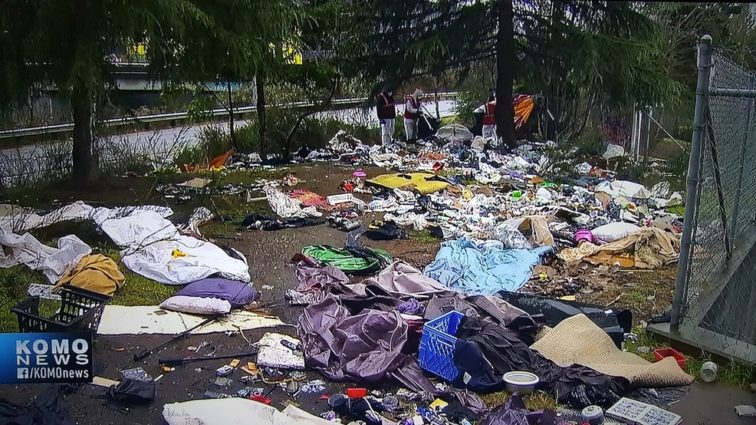 Recently a friend of mine panned the anti-300 slogan by quipping that people who say “we can do better” don’t have any better ideas. Well, I believe that I do have a better idea than initiative 300 – or more precisely a set of ideas.

I call it Initiative 303 and it’s going to cost some money. A ton of money, in fact. But we’re spending money already. Every time a fire engine and a Denver Health ambulance are dispatched to see to a suffering addict or a wounded wanderer the cost to the taxpayers in thousands of dollars and that happens all day every day; so while the costs of Initiative 303 may seem shocking at first it’s important to realize that in the long run we would save.

We can’t begin to address the homelessness crisis in Denver without first recognizing that it has much more to do with addiction that it does anything else. Yes, the lack of affordable housing is a contributing factor. However, the lion’s share of people who are simply down on their luck are able to find programs and assistance to keep them off the streets. The people who wind up “out there” are at least 90% addicts and the alcoholics who forego such programs because those require their sobriety. Therefore, treatment for addiction must be at the core of any effective initiative.

This is the potentially controversial part of my plan. The City of Denver would secure a location onto which to pour a massive square-mile concrete slab surrounded with a chain-link fence. Urban campers would be invited to set up there. Vehicles could be parked inside, RVs and tiny houses could be donated and placed there for people to live in along with the usual tents and temporary structures.

Law enforcement within that fenced area would be limited to crimes against persons – assault, rape and the like. No enforcement of drug laws would be allowed. No property could be seized. For the most part nobody would be bothered there. Friendly “beat cops” would walk Slab City with no other purpose than to insure the safety of the people there.

Four large concrete bathroom facilities would be provided – complete with showers and flushing johns – and cleaned regularly with a spray truck the way the ones in our parks are. Electrical outlets would also be provided along with mail boxes and addresses for those willing to disclose their identities. This would provide people with a hopefully temporary yet legally permanent location so that they would have the option to send and receive documentation.

Slab City would provide a centralized location for aid agencies and treatment providers to reach the people they need to reach. By not being forced to constantly be on the move the residents could forge relationships and relish some sense of community as they are offered opportunities to get their lives together.

Outside of Slab City (or cities), however, Denver would take the tact of strictly enforcing laws against urban camping. The penalty for loitering or sleeping in a public place or right of way outside of the space or spaces would be three days in the city jail – or a new facility designed and built specifically for the offense. This is where “tough love” comes in. Law enforcement’s role would grow significantly under Initiative 303. Denver would be at once providing space for urban camping and putting its foot down against it.

After three days in jail offenders would be required to report once weekly for a period of six weeks to a caseworker for counseling or once again be in violation of the law and have a warrant issued. These caseworkers would be empowered to help clients rehabilitate from drug dependency by encouraging them to enroll in a 90 day city supported program which could in turn prescribe medicines specifically designed to curb addictions to specific substances. These medicines would be provided at taxpayer expense.

Graduation from the 90 day program would result in a client being a candidate for city-supported affordable housing and a comprehensive job-placement program offering $15 / hour entry-level  jobs both public and private. Businesses wishing to seek workers in this way could apply with the city’s placement agency and the city itself could put others to work in maintenance jobs and offer additional job training for workers wishing to earn more. However, in order to remain either in subsidized housing or in job placement candidates would have to agree to be drug tested and remain – if not completely sober – free of the addictions that landed them on the street in the first place lest they find themselves back at the beginning of the process – with three days in jail

I gleaned some of these ideas from the phenomenal documentary “Seattle is Dying” by TV Station KOMO in Seattle. I strongly feel that before anybody votes yes on Initiative 300 that they should see that even-handed hour-long film.

I’m going to vote no on Initiative 300 and I think you should, too. But i’m not voting no because I lack compassion. I’m voting no because the initiative lacks compassion – and because it will contribute to the decay of my gorgeous city. I don’t believe that simply saying “Aw, screw it” should be a policy. However, we can’t vote no on 300 and then just walk away. Denver city leadership needs to provide the “do better” that opponents of the measure have expressed a desire for.

Let’s take the lead. We’ve shown that this state and this fine city aren’t fearful of going about things in new and different ways. Let’s provide a model for the rest of the country – especially places like Portland, Seattle and San Francisco – to follow when it comes to addressing homelessness and the causes of homelessness and not let Denver fall into the kind of desperate disrepair that those places have. Let’s not be bleeding hearts about it, either. Let’s have expectations of people and recognize that with the right hands-up in place there’s no excuse to live life inhumanely and stop encouraging those who insist on doing so to do so in Denver.