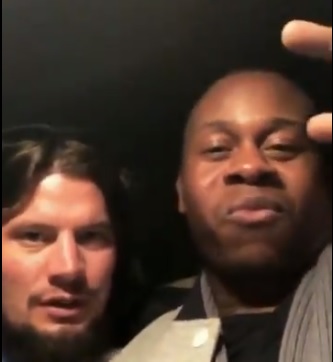 The video quickly made the rounds after being Tweeted out by the Athletic’s Nicki Jhabvala as well as a couple of other astute instagram users at about 9 am on Sunday, January 20th.

It depicts Bowlen in an embrace with Vance Joseph as Joseph flashes some sort of gang sign and the two merchants of shame jokingly debate which of them is “a gangster”. It was posted to Bowlen’s Instagram account at roughly midnight on Saturday, January 19th.

This was posted to an IG account called @superbowlen nine hours ago. pic.twitter.com/QJpDG5LJlJ

Naturally, by 10 am on Sunday Mike Klis was is spin-control mode explaining that Joseph had simply bumped into Bowlen at a “downtown establishment” where they both had gone to watch the Manny Pacquaio VS Adrian Broner fight on Pay-per-view and that after the exchange the two revelers simply went their separate ways. 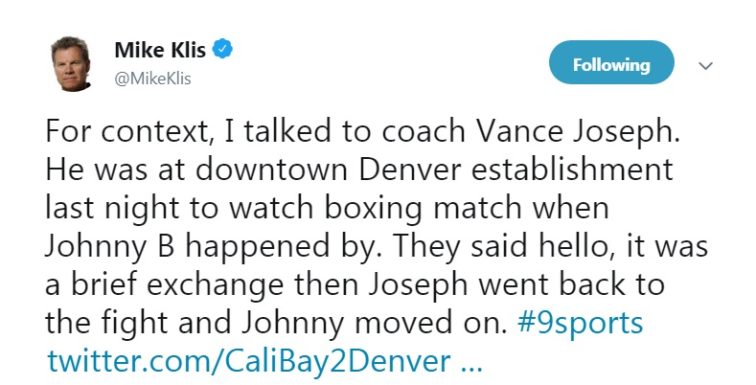 A quick bit of research into downtown establishments that ponied up to broadcast Saturday night’s fights reveals that the one Bowlen and Joseph likely attended was the Diamond Cabaret. The Diamond was one of the only places to see the match and it stands to reason that the relative privacy the strip club provides in it’s VIP areas – along with the naked chicks – would attract guys like Bowlen and Joseph.

Klis’ assertion that Bowlen and Joseph simply bumped into one another is questionable at best. It seems more likely that they watched the fight together and DRANK together – and maybe worse. The video leaves little doubt that they’re both altered.

It also leaves little doubt that Vance Joseph is who we thought he is. The man who appears in the video is not a “leader of men” who is or ever was qualified to hold the lofty position as the head coach of the Denver Broncos. The man is the video isn’t the wholesome family man who was sold to Broncos Country when he was inexplicably hired. The man in the video is an unhinged fool without the sense not to be seen on social media with the black sheep of the Bowlen clan.

Johnny Bowlen has been involved in several nefarious incidents including a famous 2015 9-1-1 call placed by his girlfriend during which he assured the dispatcher that he was “the Blood of the City” and that his girlfriend was drunk and crazy. Everybody knows he’s a total fuck up. Any quality NFL head coach who wasn’t blasted out of his gourd would know well enough not to appear in an Instagram story with him.

What I find fascinating – but not all all surprising – is that the Denver sports media has done absolutely zero due diligence in looking into the circumstances surrounding the video – aside from Mike Klis’ predictable poo-pooing of the story, that is.

The good news is that Vance Joseph isn’t our problem anymore. He has accepted a role with the dog-butt Arizona Cardinals which is perfect for him. As for the Mayor of Titty City – he’s the clown prince of Bowlens and also not our problem as there’s a zero percent chance he’ll ever have any kind of role with the Broncos whatsoever. He’s just a spoiled rich idiot and now a must-follow on Instagram.

*NOTE – Johnny Bowlen has since removed the moniker “Mayor of Titty City” from his IG profile, replacing it with “Johnny “the Spencer” Bowlen” whatever that means.