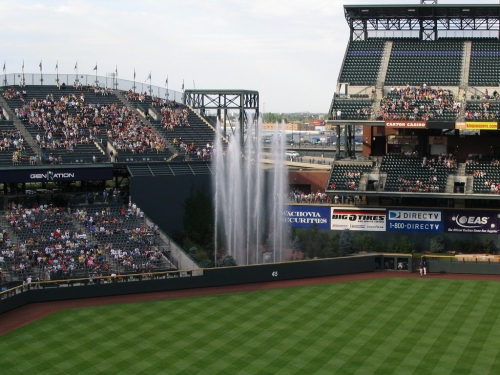 “Fenway has “Sweet Caroline”; the Giants have McCovey Cove; the Angels have a dancing monkey and the Pirates have Primanti Brothers but up until Jenny all we had was a stupid humidor.”

On Monday, April 23rd, 2018 Colorado Rockies’ third baseman Nolan Arenado launched a first-inning line-drive homer over the left field fence at Coors Field. That in itself wasn’t particularly noteworthy. Knocking baseballs out of the park is a routine occurrence for the most exciting corner infielder in the game – but this particular base-clearer was special because of the way the home run was called on TV and by whom.

In a moment that will go down in Rockies’ history the effervescent Jenny Cavnar, who was substituting for stalwart play-by-play announcer Drew Goodman that night, belted out her first (and now famous) home run call: “Fire up the Fountains, she gone”.

Any Rockies fan who was watching the game that night on AT&T Sports Net Rocky Mountain (the awkwardly-named regional sports network that blocked me on Twitter) will remember where they were when they heard Jenny’s call. I was at Illegal Pete’s on South Broadway. The call was historic not only because Cavnar was the first woman in 25 years to do TV play-by-play for a major league baseball game (and one of only a handful of women who ever had at all) but because it was good – really, really good.

“Fire up the Fountains” referred, of course, to the Coors Field tradition of activating the decorative water fountains in the northwest corner of the park whenever a Rockies player hits a home run. Cavnar’s hat-tip to the practice resonated with Colorado fans because as followers of one of baseball’s youngest teams we have few historic calling cards of our own. Fenway has “Sweet Caroline”; the Giants have McCovey Cove; the Angels have a dancing monkey and the Pirates have Primanti Brothers but up until Jenny all we had was a stupid humidor.

But why only “Fire up the Fountains” when the Rockies are at home?

The Rockies should honor Jenny Cavnar’s home run call and begin a splashy new tradition by spraying the fountains when the Rockies homer at home … and away. The regional sports network (that blocked me on Twitter) could air a quick shot of the fountains as they burst forth and passers by the gates at Coors Field could view the watery celebration from street side and know that the home team just rocketed one into the cheap seats at some ballpark far, far away.

Heck, the Rockies could even install some fountains outside the park and let all of LoDo know!

This would instantly become of the coolest traditions in all of baseball. Of the hundreds of such rituals that take place at ballparks from coast to coast none happen regardless of where the team is that day. There’s no seventh inning stretch at Wrigley when the Cubs are in St. Louis; Bernie the Brewer doesn’t slide when Milwaukee travels to Cincinnati and the ugly home run statue at Marlins Park sits idle when Miami is in D.C.. The Rockies could (and should) be the only franchise in all of professional sports to universally celebrate its team’s performance!

Now there’s at least one person who is likely to be less than enthusiastic about this idea: Drew Goodman. Goodman’s familiar “Take a good look, you won’t see it for long” is as iconic as any home run call this side of the Eastern seaboard and he would certainly never coopt his colleague Cavnar’s material by referencing the fountains but he doesn’t need to. The TV broadcast can highlight the dancing waters without his having to mention them. It’ll probably be awkward for Goodman but that’s okay. He’s probably just keeping the seat warm for Cavnar, anyway.

The Rockies can launch this unique new tradition tomorrow – Friday, May 4, 2018 when the Rockies visit the Mets. They can do it when they’re at Wrigley and when they’re at PNC Park or at Safeco or Miller Park or Target Field. They can do it whenever Rockies fans have another home run to celebrate regardless of where it may be. Imagine … a baseball tradition that only WE have.