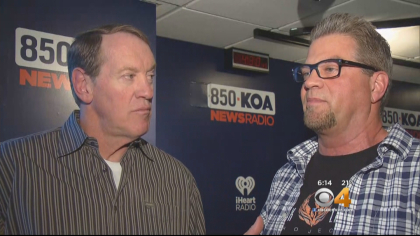 A friend of mine texted me and said that Rick Lewis’s band was opening for Night Ranger. Pretty funny on its own, but I answered back, “I wish he’d open for Great White and die in a fire.”

He told me to put that on Twitter and I said no. It would lack context and it would come off as a bad joke about a terrible tragedy. Instead, I figured I should write about why Rick Lewis is a major divisive figure in the Denver sports scene so there’s no mistaking the context.

Rick Lewis is the long time, low rent shock jock on Denver’s classic rock station, 103.5 the Fox. He’s a dying breed of white guy who rides Harleys, plays in a classic rock band, catering to other meatheads and somehow surviving on the Denver airwaves for almost 30 years. It’s a testament to his talent as a broadcaster and his middle of the road reach.

But middle of the road isn’t exactly where Lewis resides. He’s been a breathless right winger who apparently spent a great deal of time decrying the Obama years, perpetuating the birtherism lie, shrieking about Muslims and Michelle Obama’s vacation spending. But we’ll get to that.

Lewis, is also the color commentator for the Broncos radio broadcast on KOA, and just signed a three year extension and it’s no wonder he’s enjoyed such success on the station. KOA, long time home to right wing demagoguery, probably had a short list of people it would accept onto its sports broadcasting teams and Lewis was most definitely at the top. He’s certainly an excellent broadcaster but as a commentator, he’s pretty mediocre. He’s a Captain Obvious in his analysis, offering no real insight and only getting by because he’s spoken into microphone for three decades. Lewis probably knows enough about football to do the job but that’s about where the positives end.

So why did classic rock DJ Rick Lewis get this plum job? His political leanings as well as his talent certainly put him on KOA’s radar and they definitely put him on mine. Before he broadcasted Broncos games, and while he was still commanding his legions of 55 year old buttheads with his radio shows, he was a staunch anti-Obama guy and a birther who didn’t mince words about this hatred of the past President.

That’s fine if you lean one way or another politically. But as a public figure who plays rock music that is presumably pretty anti-establishment (CCR’s “Fortunate Son” comes to mind), it’s odd to have someone who did nothing but publicly bash the President for things we know to be false, now broadcasting Broncos games. I know for a fact that many other announcers for local sports teams are all what I’d consider conservatives. But you rarely see them laying bare their hatred for liberals on their social media accounts because their main job is to relay sports information about a particular team to the broadest audience possible. If Jack Corrigan, play by play guy for the Colorado Rockies, started tweeting about locking up Hillary Clinton, it would put an unscalable divide between him and the fans of the team which is definitely not what he’s being paid to do. Lewis, prior to his appointment to the Broncos radio broadcast, felt no need to tread lightly and let his disdain for liberals and the President fly at will.

“But everyone bashes the President now, John.”

That’s true. I do it all the time. But I’m also not a famous person broadcasting for a professional sports team who is trying to cater to the widest audience possible. I’m sure plenty of Lewis’s listeners leaned Democrat during Obama’s time in office and were conflicted about their working class Groove Hawg being so vile in his hatred of the President. Find me one local Denver sports broadcaster who is this vocal in their hatred of anything political and I’ll buy a ticket to Night Ranger. I’ll wait.

Take a spin through Lewis’s Twitter feed and you’ll find a much more sedate personality these days. I’m sure his KOA overlords told him to tone it down because they knew this brand of irrationality, while working for the daytime hosts on the station, won’t work in the supposedly nonpartisan world of sports.

Lewis’s Twitter feed is a much more tame, pseudo-spiritual journey now. I’m guessing since Obama is no longer President he’s more at peace. For example, when someone mentioned not reading the comments on the internet, Lewis replied:

“I’ve been on a remote island in the Pacific and have not watched a minute of TV and tried to stay off social media. Amazing how much better life is when you step back from the hate and vitriol.”

Search Rick Lewis’s twitter handle (@1RickLewis) and Obama and you’ll have hours of hate and vitriol at your RTing fingertips. Here are some selections:

Rick seems to be concerned with Putin. But is he now? 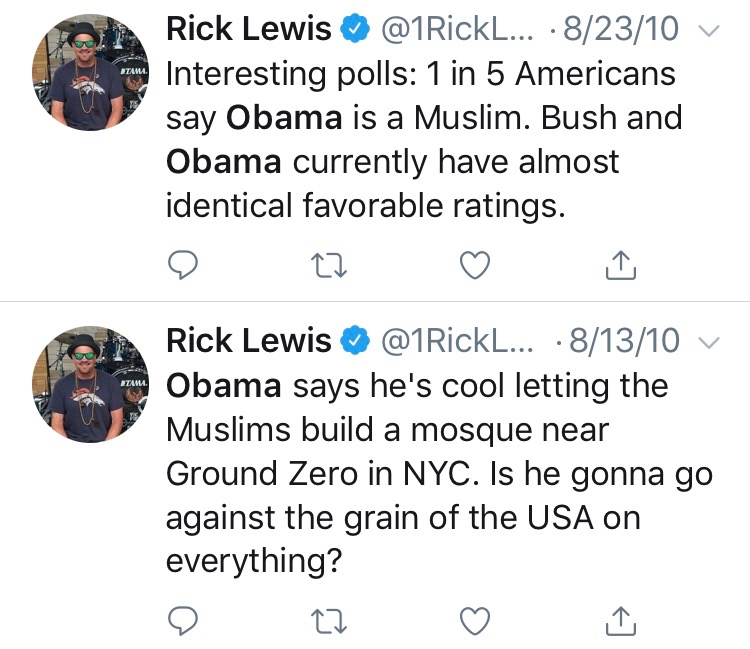 We should check in with Rick on how he thinks race relations are currently.

Rick is a Breitbart death truther.

Here Rick spreads a lie about Obama being born in Kenya. 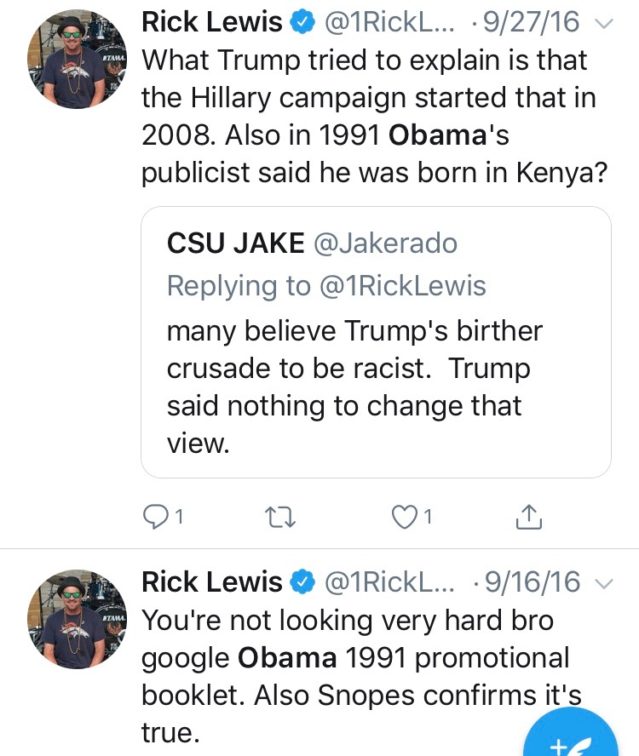 On that last one, I did look it up on Snopes and while it is true, what Mr. Lewis declined to mention is that it was a mistake in the booklet and not a true statement. Even Lewis’s hero, Andrew Breitbart had said he didn’t think Obama was born in Kenya. But Lewis furthered the inflammatory birther rhetoric simply because he hated Obama that much.

Back in May of 2012, Lewis had tweeted, “I support whoever wil beat Obama no matter what party they are” to which I asked him “Nazi Party or Lemon Party?” He didn’t respond but it was clear: Lewis was so angry at the black President, he didn’t care who he alienated as long as he could be right and the naughty black man wouldn’t be telling him what to do. But again, this was before the sweet gig doing color for the Broncos.

I wonder how the current Broncos players, presumably some who were Obama supporters, would feel about Mr. Lewis’s unbridled and unreasonable hatred for the black guy?

This was long before we thought Nazis would be an issue ever again. In this country at least. But it stuck with me. Rick Lewis would take anyone, literally anyone, over an intelligent and rightfully elected President. And that kind of attitude is why we have white supremacists marching in our streets. It’s why we have white nationalists taking up cabinet positions in the White House. They were so hellbent on erasing anything Obama did, they put the worst people in charge of our lives. And it’s all there in Lewis’s tweets. Whether he still feels this way is unclear. As mentioned, his feed is fairly composed now and probably mandated because of his current gig. But one part of the Broncos radio team definitely engaged in the ol’ “hate and vitriol” for quite awhile. That’s why his corporate compelled enlightenment is a fucking joke.

This will go unnoticed like a fart in a wind tunnel. But since Lewis didn’t bother to delete any of this, it goes on the public record. It should go without saying that this isn’t an attack on conservatives or people who have a different viewpoint. But it is an attack on willful ignorance and people who thought Obama was a secret Muslim and born in Kenya like Rick Lewis does. The current President may get a pass on being a nutjob birther, but the voice of the Denver Broncos shouldn’t. And it’s exactly the kind of thing an organization that’s been circling the drain doesn’t need. Or maybe it’s just normal at this point. The Broncos have made some terrible personnel decisions recently, why shouldn’t KOA?

The Broncos are like family. We won’t always agree and that’s fine, but no matter your race, religion or political affiliation, we can all agree on our love for the team. Sports can be divisive but for the usual “my team is better” reasons. Chiefs fans can crow about their good team, while Broncos fans will point to three Super Bowl victories. Sports should be the one area where once the clock starts, the only thing we disagree on is if Vance should be fired this week or last month. It’s important for Rick Lewis to own up to this garbage, be a man and admit he was acting like an irrational asshole. Everyone is entitled to their opinions, but wallowing in this garbage like Lewis did makes the Broncos look bad. I mean, worse than they already do.