There’s little doubt that the darling of Denver Broncos training camp 2018 has been the nephew of NFL Hall of Fame QB Jim Kelly, Chad “Swag” Kelly, the 24 year-old gunslinger out of Ol’ Miss. Swag has opened the eyes of the assembled media, the fans, the coaches and even old number seven himself. He has been so effective that he has supplanted first-round selection Paxton Lynch as the team’s new backup QB behind Case Keenum.

John Elway told 103.5 the Fox: “He played better the other night. That’s what we came into camp to see. Now we switch roles. The guys Chad will play against now will be better players so we will see how it goes Saturday. But it’s only fair they both get opportunities with the second team.”

John’s just being nice, of course. He knows what everyone seems to know – that Paxton Lynch is donezo in his role with the Broncos. Swag has moved into the second QB spot and he’s going to stay there until and unless the Broncos sign a veteran free agent to hold the clipboard.

This is Chad Kelly’s second season with the Broncos. He was chosen with the very last pick in the 2017 rookie draft, earning the distinction of being called “Mr Irrelevant”. At this stage of the game, though, he’s anything but. In fact, Swag is a fan favorite.

His history would seem to suggest that the answer to that question is “hell yes he’s a ‘bag. A complete and total ‘bag.” Or at least he was for a long damn time before he got here.

In 2012, after high school and before joining the Clemson Tigers, Kelly fired a shot across the bow of Clemson’s quarterback via Twitter: “Your on the bench for a reason! And i come soon! Just letting you know”.  Nevermind the incorrect use of “your” and the lowercase “i”; that wasn’t exactly the best way for Swag to ingratiate himself to his new squad.

As bad as his Tweet was, though, his now famous self-indulgent Sound Cloud rap was even worse. Swag hadn’t thrown a post high-school pass yet but he rapped his own name over thirty times in three minutes and forty-nine seconds. Only a ‘bag could have done that.

After finally arriving at Clemson Kelly tore his ACL in a spring scrimmage, ending his 2013 college season. Then, during the second spring game of the following season Swag lots his mind on the Clemson coaching staff when they decided to punt rather than allowing him to try converting a fourth down. There were roughly 20,000 Clemson faithful in the stands to witness the tyrade.

A couple of days later head coach Dabo Swinney and his assistants sat down with Kelly to discuss his outburst. Rather than listen to what they had to say, apologize and ask for a second chance, Kelly went ballistic again, launching into a verbal tirade. At that point Clemson was done with Swag Kelly.

He transferred to East Mississippi Community College and managed to stay out of trouble long enough with win a Junior College national title in 2014. He was then recruited by Ole Miss.

His career there almost ended before it began.

In the ‘baggiest instance of his ‘bag behavior, in December, 2014, after having been kicked out of a Buffalo, New York night club, Swag threatened to get “my AK-47 and spray this place”. 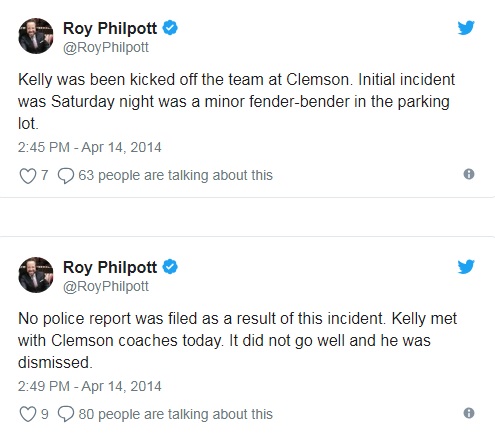 Here’s a description of the event from the Buffalo News:

Kelly, 20, of Niagara Falls, refused to leave Encore at 492 Pearl St. about 3:15 a.m. and punched a bouncer in the face, Buffalo police said. Kelly’s companion, Brandon Hickey, 21, of Clarence, had been thrown out of the bar earlier and tried to re-enter, police said.

Kelly continued to fight with two bouncers and stated “I’m going to go to my car and get my AK-47 and spray this place,” according to a report.

Buffalo police officers responding to that alleged threat stopped a 2005 Ford F-150 pickup truck in which Kelly was a passenger at 458 Pearl.

Kelly was forcibly removed from the vehicle, officers said. Police said Kelly kicked and tried to swing at officers as they removed him from the vehicle. They said he resisted getting into a patrol vehicle and struggled with staff at central booking.

Swag went on to have himself a nice little stint at Ole Miss. He finished his junior season with a record of 10-3 and became the first Rebels QB to beat Alabama, Auburn and LSU in the same season. Sadly, he tore his ACL again during his senior year and suffered a torn meniscus.

Swag had hoped to participate in the 2017 NFL combine but the league rescinded their offer to let him do that. Still, he was fortunate enough to be drafted by Denver with the very last pick.

And now he’s here. And he’s the backup quarterback. And, as backup quarterbacks tend to be, he’s the apple of everybody’s eye. But it’s pretty obvious that he’s a total ‘bag. The question is when (or if) that will turn around and bite the Broncos in the ass.